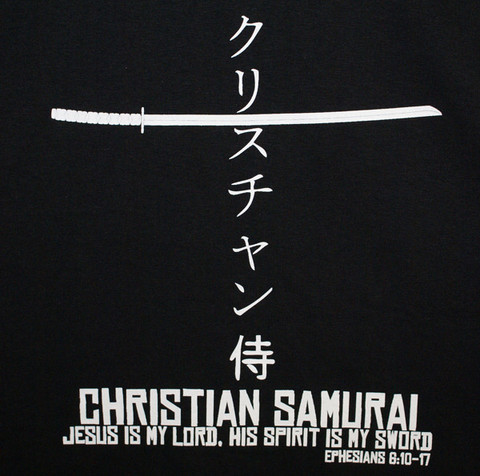 Even years after I wrote The Way of the Christian Samurai, I still get comments and questions as to why I wrote the book.

I don’t have a background in the martial arts, though I would appreciate a good sensei. My interest and inspiration into the concept of Christian lessons from samurai writings started with my own recognition that I was a terrible salesperson, especially for my own work and skills.

At my local library I found an intriguing-looking book called Samurai Selling. The idea behind this book was that the servant warriors of japan, the samurai, could teach the modern salesperson a great deal about what it means to serve.

The quotes from Musashi and the Hagakure captured my imagination. No one talks like that anymore. You could say that about any historical text, I suppose, but for me the ancient samurai texts rang particularly true, and I sought to read the source material.

While I suppose their was some inkling that modern Christians could get schooled in how to serve others and their Lord by these pagan soldiers for hire, the idea of matching up the writings and Christianity did not start to consume me until another unusual work.

Ghost Dog: Way of the Samurai. I have no idea why I chose to watch this movie initially. I’m not sure if most people would even consider it a good movie. Maybe there was something in a review about it drawing so heavily from the Hagakure.

Whatever my reasons for watching a movie about a mob hitman living as a modern samurai, at some point in the movie it clicked that these principles of loyalty, honor, living as already dead, and more exemplified the Christian way of life in a startling way.

Of course, the Way of Christianity and the way of the samurai are not the same. There are a lot of teachings that were irrelevant or contrary to the Christian life as I poured over the source material. But as I so often explore in my other writings under the concept of Eternal Revolution, Christian spiritual life in the modern world is one of warfare, and we are called to heroic levels of resolve, loyalty, and service.

Eventually, the book was finished, and I still get notes and emails about how life-changing the perspective is. Sure, some people miss the point and think I am trying to reconcile two schools of thought. But my point was, and still is this – if a pagan mercenary could serve his fat, greedy lord with complete self-sacrifice, resolve, and loyalty, what can he teach you as a modern Christian claiming to follow a most perfect Lord in Jesus Christ shirk even the simplest of his commands?

By the way – if you like the image in this post, it is available here as a t-shirt.