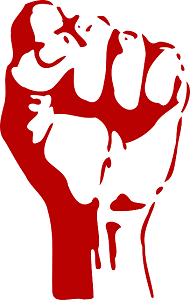 Someone asked me a question yesterday via the GKChestertonQuote.com site: If “revolution” is so often used as a leftist and communist idea, why would a Christian author like G.K. Chesterton issue a call to revolution like “Pray for Revolution?”

To paraphrase Chesterton in Manalive, a revolution is always a  return. A revolution is a radical change, a re-turning to some ideal that was lost. As Christians, the idea is that what we have lost was Eden, what we hope for is the Kingdom of God. In our fallen world, to realize these ideals in the now, we must radically change ourselves in order for that to happen.

“To the orthodox there must always be a case for revolution; for in the hearts of men God has been put under the feet of Satan. In the upper world hell once rebelled against heaven. But in this world heaven is rebelling against hell. For the orthodox there can always be a revolution; for a revolution is a restoration. At any instant you may strike a blow for the perfection which no man has seen since Adam.” Orthodoxy

Near the end of Manalive, Innocent Smith has a conversation with a Russian revolutionist:

[Smith:] “I am a revolutionist. But don’t you see that all these real leaps and destructions and escapes are only attempts to get back to Eden– to something we have had, to something we at least have heard of? Don’t you see one only breaks the fence or shoots the moon in order to get HOME?”

“No,” I answered after due reflection, “I don’t think I should accept that.”

“Ah,” he said with a sort of a sigh, “then you have explained a second thing to me.”

“Why your revolution has failed.”

To get started reading the revolutionary works of Chesterton I would suggest the essay “The Wind in the Trees” (From Tremendous Trifles), Orthodoxy (of which the seventh chapter is called “The Eternal Revolution,”) and Manalive.