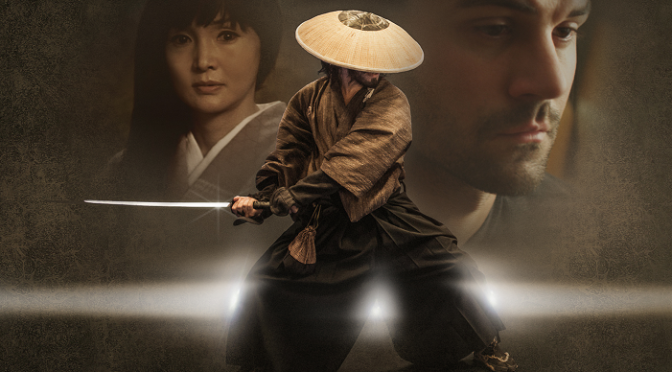 Craig Shimahara and I connected several years ago, after he had finished producing his short film Good Soil and I had finished writing The Way of the Christian Samurai.  We obviously shared a certain perspective of Christianity in light of the ancient masters of the sword, the samurai of Japan. So when Masterless was finally done, Craig sent me a screening copy to review.

Craig’s background is architectural illustration, when he’s not making movies. I point this out as the visuals throughout the film are remarkable. If you have been following the Masterless Facebook page you will have seen several storyboard/scene comparisons over the last couple years; the emphasis was clearly put on creating memorable visuals.

I’m convinced Masterless could have been a silent movie. I don’t mean that the sound and spoken parts didn’t add anything, but the visuals alone are enough to tell the story. Too often exposition has to be spelled out in the dialogue, which either comes across as re-stating the obvious or using the actors to spell out the  plot to tell rather than show what is happening. This is not the case with Masterless; each scene paints a picture, not only of what is going on in the world of the film, but what is going on within the characters, especially the protagonist Kane Madison (Adam LaVorgna).

The early Christian Fathers read sacred texts in at least three methods, literal (what the text says in historical context), moral (how what the text says relates to an individual’s life as a Christian), and allegorical (how the text relates to the gospel or life of Christ). Classical literature can be read in this polysemous sense, but much of today’s entertainment of the masses cannot.

For example, Gregory of Nyssa wrote about 600 pages in his Morals on the Book of Job, doing a line-by-line analysis of the short book of Job, applying the three senses to every part of the text. You can hardly do that with most of what makes the New York Times’ Bestseller list these days. However, you could do that kind of deep analysis with Masterless.

Just by knowing the premise, that the story of Kane Madison is told both in the happenings of his modern life as an architect, and as his journey as a ronin in ancient Japan. Symbols abound, but there is not necessarily one way to interpret what is happening on the screen. This makes it a great film to use for a group study, and should foster discussion with almost any group.

For example, there is a scene where the ronin encounters an old blind man in a forest. A sword in its scabbard is stuck upright in the ground next to him. The old man mocks the ronin at the same time as he give him a mission – take the sword, follow the path to the tree at the end. When the ronin questions the old man further, the old man responds, “My charge is to inform, not to inspire.”

It is a brief scene, but I could probably write several essays on different topics using just this one encounter. For instance, on the nature of inspiration and evangelizing – for to be “in-spired” by the Holy Spirit is a divine gift, not something another human can do for you.  The taking up of the sword to follow “the way” can be seen either as an allegory of taking up the cross – an instrument of death – as Christ did, or the call of the Christian to do the same to follow in his footsteps. Yet another insight could be the idea of the old man as the faults of Western Christianity, mocking the very souls it supposedly is to lead, speaking but not taking action.

What it is Not

Some movies are made to preach, others are made to show action. You might expect one or the other from a Christian-samurai movie, but Masterless is neither.

Masterless is undoubtedly a Christian movie, but there are no biblical citations, no mention of the name of Jesus, and no explicit preaching. Often Christian films will be so overly concerned that the viewer might miss the message that the audience gets beaten over the head with it repeatedly. They may even have a character to preach to the audience (though talking to another character), often cast as a pastor. Masterless does not lose its message despite staying allegorical, in fact I think it does a better job of making you consider many aspects of the Christian life because it does not make any particular aspect too obvious. The more familiar you are with the Scriptures, however, the more you will recognize bits of dialogue as literal or adapted quotations.

Neither is Masterless truly an action movie, as we have been accustomed to seeing from Hollywood. There are some well-choreographed fights, but there are also fights that you see building, tension mounting, and then only the aftermath is shown. There are reasons for this, but it demonstrates that Masterless was not made for simply for the sake of showcasing martial arts fights strung together with a thin plot. Story is definitely first.

The best way I can describe Masterless in terms of other films is that it is in the tradition of classic cinema or art films. It will more likely remind one of Kurosawa or Hitchcock then Spielberg or Bay.

We watched this film with our six children, ages 3-14. There was nothing too frightening, no sexual innuendo, and the violent scenes were bloodless. Our 6-year-old did remark that he liked the ronin scenes better than the modern-day scenes.

I do not think it is inappropriate for younger viewers, but the pacing and allegorical nature may make it less interesting for them, and much of what is going on may go over their heads.

Masterless is an enjoyable and entertaining film, and one that has been crafted to  encourage deeper reflection and discussion on spiritual warfare and living as a Christian in spite of the difficulties and temptations of the world. It is ideal for a men’s group or youth group to watch together and discuss.

For more information on the film, showings, and availability visit MasterlessFilm.com. You can also pre-order the BluRay edition of Masterless on Amazon. DVDs are also available for pre-order.