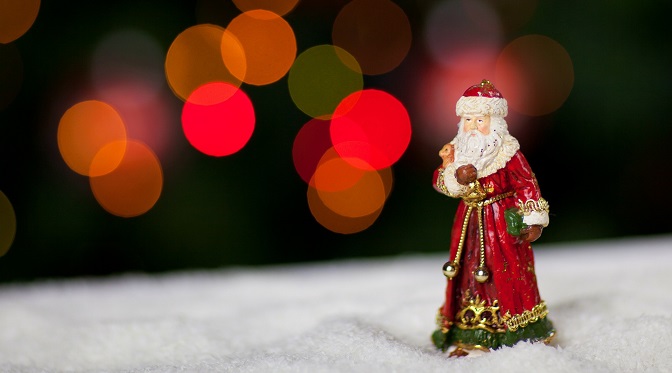 As a Christian parent, how you handle the Santa issue is one of those hot-button issues. Some keep the tradition going, others see participating in the idea of Santa giving gifts as dishonest.

My wife and I have encouraged the belief in Santa Claus, and are not ashamed to admit we still believe in the mission of St. Nicholas of Myra, and acknowledge miracles that take place in the carrying out of that ministry.

The parental challenge, therfore, is how to transition those young children that believe in Santa Claus (with the constant reminder of who he really is/was and in Whose Name he does his work) through the adolescent years to a second childhood of belief?  How do you have that awkward conversation in the first place?

Before our oldest came of age to know the whole story, I had the idea to create a rite of passage ritual. After all, the “magic” or belief in miracles should not end when the idea of flying reindeer and a North Pole workshop HQ pass away.  Instead, the belief in heroic charity should be stirred.

In the tradition of G.K.C.’s Detection Club and disclosing the ceremonies of secret societies, I have decided to post the ceremony we use. Feel free to adapt it to your own use. I had thought of including it in as an appendix to I Hate Christmas, but it did not quite fit the purpose of that book.

We typically conduct the ceremony on the night of December 6 (St. Nicholas’ feast day) with the advent wreath’s candles (with however many lit as ought to be at that point) as the only light. The initiate is summoned from their bed after their younger siblings have fallen asleep. Those already initiated stand on one side of the table, the initiate on the other.

After the initiation, the child takes an active role in Santa activities, such as assisting with shopping, present research, and Christmas eve setup – although their own gifts generally remain a surprise.

The Rite of Initiation

[Name], in Christmases past, you have received gifts from others, in the Christian tradition of the Magi who gave gifts to the Christ Child, and St. Nicholas, Bishop of Myra, who gave gifts in the name of Jesus.

Your Christmas gifts in the past have been given to you by friends and family. Some have also come in the name of Santa Claus, the immortal spirit of St. Nicholas’ gift-giving ministry.

Stories and legends of Santa Claus living at the North Pole and using flying reindeer to deliver gifts have become popular. These stories try to explain the impossible with stories of magic, and as such are not true.

However the truth about Santa Claus is mystical and incredible. Over the centuries, during the month of December, all around the world, gifts are still given in the name of Santa Claus anonymously by millions of people to celebrate the birth of Jesus Christ. The generosity of this spirit is the cause of many miracles at this time of year.

By using the name Santa Claus – a name for St. Nicholas that has changed over time – Christmas gifts arrive miraculously. This way children associate the winter festival of Christmas and its miraculaous gift-giver with the origianal Christmas Miracle – the birth of our Lord and Savior.

[Name], you have grown in wisdom these past few years, and now understand the true reason of Christmas, and the great importance it represents for yourself and all humanity.

For the sake of those still too young to realize what you have come to know, I hereby invite you to join the ministry of St. Nicholas as an anonymous gift-giver, using the title of Santa Claus.

I also give you the symbols of our ministry:

A Gold Coin – St. Nicholas gave to those in need – the gift of charity. Be mindful of what others need.

A Candy Cane – The giving of a gift is often not about meeting a need, but the spreading of joy. Remember also to give things to others that they will enjoy.

For the very young, the fanciful stories of Santa Claus lend exceptional myth and mystery to the true meaning of Christmas. Until those young people grow in wisdom enough to put aside such beliefs, do not dissuade them. Teach them of the story of the Christ child, and remind them of the reason for gift-giving and celebration in the midst of winter while allowing them the more fanciful stories as well. In time, they too will join us in the secret arts of Christmas gift giving, and their recollection of a childhood of wonders will be as a cloak about them in the cold, bitter harshness of a world that denies the supernatural.

Welcome, [Name], to the Ministry of St. Nicholas. Through your gifts, and those of everyone who takes part in the tradition of gift-giving, may God bless us, everyone.