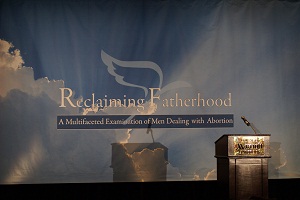 –Vicki Thorn, founder of the National Office of Post Abortion Healing and Reconciliation and Project Rachel

In my capacity as a journalist I attended the Reclaiming Fatherhood conference on Men and Abortion in September of 2008, put together by Vicki Thorn, founder of Project Rachel, and the Knights of Columbus, with the support of many other individuals and organizations. The 2008 conference was to be the second annual conference, but in the past 2 years in the past 7 years no further symposiums have been arranged. The audio of the conference was supposed to be released as free MP3s and DVDs were going to be made available. So far, this has not yet come to pass.

As I was going though my archives I realized I still had my recordings of the talks. Granted, I was sitting about 5 tables back from the speakers, but the audio quality was still decent for most of the talks. These are “bootlegs,” and you can hear my camera’s shutter and my typing at times, as well as other background noise.

However, it occurred to me that these audio files could be of tremendous use in the relatively silent wake of the 2008 conference. There were a number of valuable and intriguing gems of information at this conference. Advice from scholars and therapists on why traditional therapy does not reach men. Testimonies of real experiences. And antecdotal evidence from 1 study and 3 practicing counselors of a possible link between abortion and homosexuality.

So here they are as MP3s – raw and uncut. There are 14 talks and about 10 hours of audio here. You can’t stop the signal.

Keep on scrolling down to listen to each of the talks right here in your browser, with some brief commentary of my own. Click on the speaker/topic name to start playing  or right-click and choose “save as” to download.

Vicki Thorn opens the conference, and the first of four personal testimonies is given by Bruce Mulligan. The testimonies (which really need no comment from me) are short and very powerful. Some of the names may be familiar.

Vicki Thorn spoke on the physiological aspects of fatherhood, and how abortion impacts that. Great information for sex ed, biology, or for expectant fathers, in addition to its value to the pro-life initiative and post-abortive healing.

Coyle and Rue on Existing Research

This talk by Catherine T. Coyle, PhD and Vincent Rue, PhD is very dense with information on studies that have been done already on men and abortion, and their strengths and shortcomings. Might be a bit dry for the casual listener but those of you in the research fields will want to pay close attention to this one. (Intro and start were cut off, sorry.)

Lionel Tiger on Fatherhood without Paternity

Lionel Tiger, PhD. was a surprising guest. Right off the bat he admitted to not sharing the pro-life approach to the abortion problem, but he spoke at this conference out of solidarity with those who recognized men’s shrinking role in society and the harmful impact.

Tom Golden’s presentation on Masculine Healing pointed out how modern counseling and therapy does not address mens needs or provide the environment men naturally seek. A must not only for post-abortive men and those that love them, but anyone who has a man in their life who suffers from grief. Tom was the most animated of the speakers and left the podium for much of his talk, so the audio levels are low.

Vincent Rue on Trauma and Abortion

The first of the second day’s talks, Vincent Rue returned to address the specific psychological impact and symptoms of the trauma of abortion in men. The talk is preceded by (part of) a presentation of an award to Vicki Thorn.

Greg Hasek on Medicating the Pain

A terrific follow-up to identifying the pain caused by abortion, Greg Hasek spoke on the grieving and normal and abnormal ways men deal with the pain. Another very important talk for those who counsel, love, or treat men that are grieving.

While many of the speakers to this point may have had a Christian world view, their presentations were on the biology, statistical data, or psychology of abortion’s impact. Fr. Martin Pabel dedicates his presentation to addressing the needs of the soul.

Catherine T. Coyle, PhD, returns to speak on the use of forgiveness therapy for men hurting from abortion, and what forgiveness really means. Her talk is preceded by Vicki talking about future plans, including the talks becoming available as free MP3 downloads.

The closing Q&A session with Greg Hasek, Viki Thorn, Dr. Coyle, and Fr. Pable. There is an interesting point where Hasek, Thorn, and Coyle all recall having post-abortive patients who identified as homosexual after the abortion; some returned to heterosexual relationships after therapy. At this point the data is anecdotal, but could be the subject of a future study. For more information on the conference, you can visit the main site at MenAndAbortion.info. Note: MenAndAbortion.COM is a pro-abortion site. MenAndAbortion.NET is another pro-life organization. The domain suffix matters a great deal here.

Press Coverage of the Conference: American Life League’s Celebrate Life Magazine US News and World Report (and follow up article)