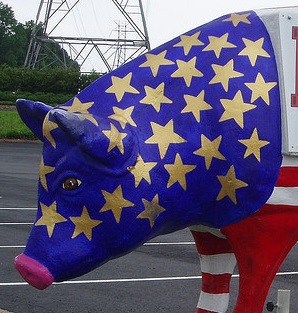 This past weekend, we marked the anniversary of American independence, with much fanfare and perhaps some somber remembrance.  One of the items that tends to circulate is a list of the sacrifices faced by the signatories of the Declaration.

While some of the extreme losses are exaggerated, as Snopes.com points out, some of the more trivial sacrifices were left out. Serving on the Continental Congress was not a profitable measure by any means; the business and family life of the Founding Fathers suffered in their absence, while they directed their energy and attention to something they thought was more precious.

In our family, it is a tradition to watch the musical 1776 around this time, which attempts to portray the mental anguish of John Adams, among others, during the few fateful months in the summer of ’76.

In the remarkable timing that is God’s, I heard a challenging sermon on the driving out of the demons and casting of them into swine in Matthew 8. In the biblical account, Jesus cast out demons from two men that were terrorizing a region. So fierce were they, that passage on that road was impossible. Jesus allowed the demons to take possession of a heard of swine, which were destroyed. At this, the people of the area pleaded with Jesus to leave them.

The core of the sermon on this story was that the people feared the loss of their possessions more than what Jesus had to offer them. He delivered two of their neighbors from demons, liberated the area from the violent actions of the men which restricted travel, and who knows what else He could have brought them in the way of salvation. Instead, the people were afraid of what else they might lose, besides their herds of swine.

Are we afraid of the loss of our possessions, our welfare, and our material security as we try to follow Jesus? If we are, we risk pushing Him away. Like the American Founding Fathers, we must be willing to risk everything that we might give our all to following the greatest of causes – the pursuit of the Kingdom of God. The revolution to seek the Kingdom will cost us dearly, are we really ready to make those sacrifices?